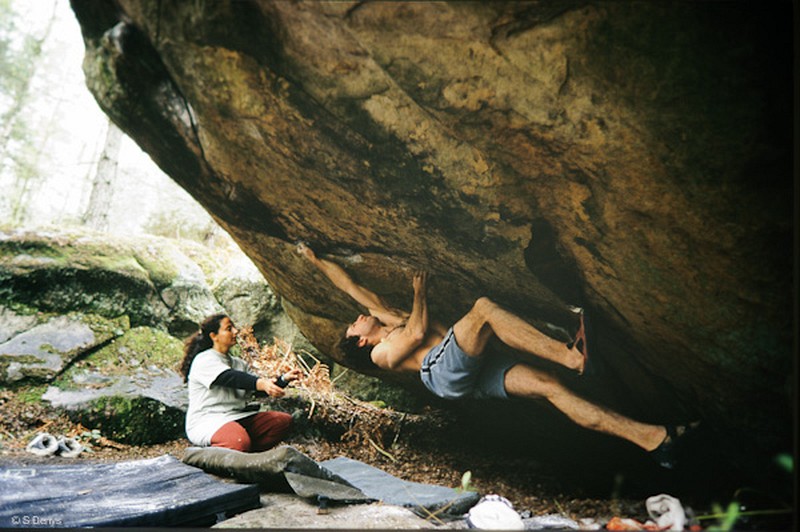 Climber: Fred Nicole Copyright: Stéphan Denys
Loading...
More
Climber: Fred Rouhling
Another one - Anonymous (15-07-2008 17:07)
Fred rouhling send it (video available on his website)
food for thought - weaker (16-07-2008 02:16)
a few other possibilities:
- some (most?) climbers don\'t give a damn about this site or any other when it comes to logging their climbs
- some profiles were created by admins to point to climbers who appear on photos, videos or as problem authors, i.e. not created by the climbers themselves
- some climbers may have listed a personal selection of repeats which reflects their own best of, sort of climbing c.v., and don\'t bother updating it
- some scrupulous climbers actually started to register all their climbs before discovering the vanity/tediousness of it, and then stopped.
- of course, some of these scrupulous climbers chose to keep this info private, i.e. not visible by anyone else
- you may find some perverts who claim repeats for boulders they did not send or even try (this is actually not true, does not happen in real life, a fantasy of mine, pls ignore)
- ... (add your own)

conclusion: none really except that there is no real value in the \"statistics\" and facts you get out of this site. Even boulder counts appearing on the home page should be used cautiously, cf multiple forum threads on boulder variants and games.

Un toit un toit ... - raph (31-05-2010 14:25)
Un toit un toit , moi j'avais trouver que c'était une jolie dalle incliné en 4+
nicola flamel - alice (14-05-2003 01:13)
texteallo c'est vraiment po fort qu'il n'y es po de texte sur nicola flamel et la pierre philosophale
Pierre Philosophale - Weaky (31-01-2006 00:24)
Hi,
Recently I was touching the Pierre Philosophale .. it is awesome!! :) Does anybody know how many people has passed through this roof till the date? I do not see any public registration. Isn't that strange that so clean line is not repeated? Maybe it is bit harder then "just" 8b?
Repeat after me - N one (31-01-2006 13:10)
The boulder has been repeated, but these people don't want to be in the public registration of bleau.info.
Pierre ... - Weaky (31-01-2006 15:18)
Understood. So those mysterious repeaters are not the same people which already register their ascents of other hard problems, i.e. none of these already registered has done it. anyway.. thanks for info :)
To be exactly - Anonymous (31-01-2006 15:37)
Well, as you can see from the star-rating, the boulder has been repeated. In fact, it has been repeated by someone who normally makes his repetitions public, but this repetition is one that can only be found on his profile page (my educated guess: because the repetition date is not correct). How to find out who it is? Well, google for "La Pierre Philosophale" site:bleau.info for instance....
some repeaters according to magazines - Anonymous (31-01-2006 18:46)
jacky godoffe, christian roumégoux for example. but i think there are other and i am not sure: graham, cermak, f.hélias, ...
... - Weaky (31-01-2006 23:45)
If this what Adwin said is true, then I wonder what makes those people to register just some of the repeatings and others seem to not deserve for it. Isn't a quite strange politics?
I took a look at profiles of some bleausards suspected of the send (according to suggestions) and did not find any sign of such registration... google also did not give any further infos.
I think I have to finish this investigation before it transform in some kind of obsession ;)