On the boulder with red n°1, underneath Big Jim. Low start with underclings and finish with the right arete, a spike and pockets. Update (March 2015): the upper undercling has broken off but the problem has been done again by Guillaume Glairon-Mondet, who proposes the grade of 8a+/8b (to be compared with the initial grade of 8a/8a+). 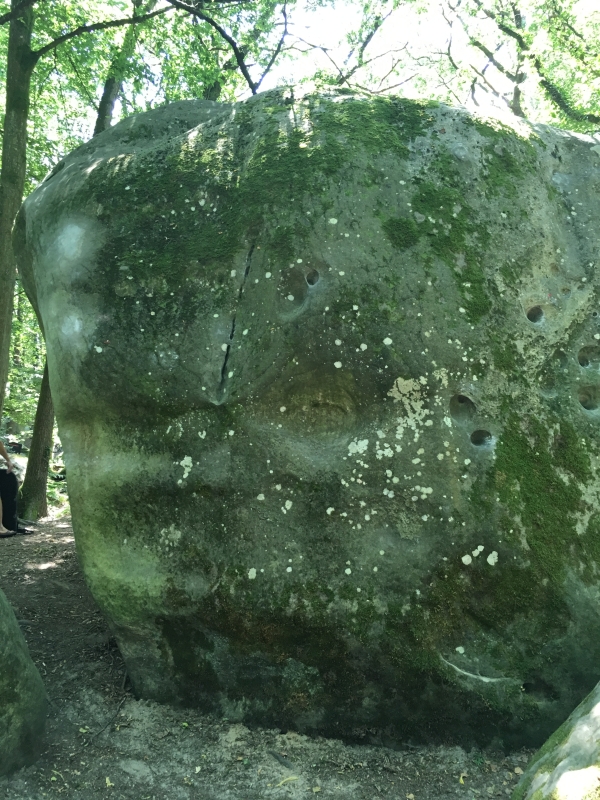 And if I'm not wrong, there's the Dave Grahams' attempts on another vid (I look for it and post it if I find)

(try it in colder temps than 30+ degrees Celcius to prevent total skin (read: finger) loss with one attempt though ;)

method - Anonymous (20-02-2007 10:58)
is there a defined method to this problem or is it just who goes up is right?
with undercling I guess you mean the big one left of the rounded arete, right? (as you could also start at the arete itself)
what would be the standing start graded?
cheers
Method - Anonymous (20-02-2007 12:54)
Who goes up is right! Start low with both hands on the big undercling left of the arête, make a big move right to the arête and go up with a smaller undercling and a sloper on the arête. Finish with the spike and the good bowls on top! The standing start is not much easier the crux is to move up with the spike right hand and a heel hook right on the sloper.
thanks, bart! - Anonymous (21-02-2007 12:22)
you may answer also to my post 'unknown boulder, rocher fin'.
mybe you're the one to know it.
cheers

Old and new beta - Gib (24-03-2012 11:05)
This boulder is only 8a+ with the old beta (right foot heelhook high on the arete). The new beta (left foot toehook in undercling and jump directly) is 8a.
This might explain the discrepancy in the registered ascents.