On the left face of the big boulder with La Digitale (black n°22). Sitstart to the left of Atmosphère with the two hands on a vertical hold, dyno to a big flake and exit directly via a mantle on the ledge. 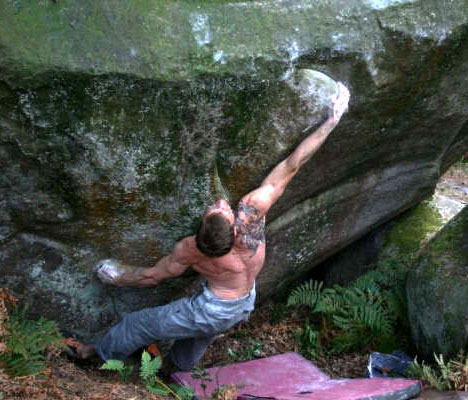 Climber: Jan Gorrebeeck
Loading...
More
Climber: Daniel Olausson
Loading...
More
Not 7A - Anonymous (31-08-2013 18:25)
I found the standing start quite easy. I think I flashed it. I thought it was easier for me because I'm pocket-size but a friend also sent it in 2 tries. So maybe a 6C.
short people have the answer - Anonymous (31-08-2013 18:33)
My criterion for whether you can use a handhold for the sitstart is this: if I (1.65 m) can reach for it without using a pad, it's is ok for everyone :-)
First ascent by pygmee? - Umberto Echo (07-02-2011 20:57)
Starting with both hands in the low jug seems a little bit too contrived for me. It's more logical to sitstart with right hand on the crimpy sidepull above.
i dont agree - Anonymous (08-02-2011 09:48)
Its very logical to start with 2 hands on the low jug, doing the move to that sidepull is the only hard move on the route
Still don\'t get it - Echo (08-02-2011 13:28)
Just because it\'s harder it\'s logical, now? You don\'t find it contrived adding a really akward move when you can grab the hold just in front of your nose? To me, that\'s against the spirit of climbing. This boulder problem is fun enough without messing up the start. Did you start both hands in the low pocket on Carnage assis as well? On Vandale, the ultra-low start makes sense because you have to drag your buttcheeks lower down, but that\'s not the case on this one.
no - Anonymous (08-02-2011 14:51)
Right I am the first person always to say in bleau about ilogical starts, but I think for this it is very logical to start were it does, to reach the high side pull is impossible for most sitting on a carpet on the ground, unless you start half way up the banking

But I always say to my friends, I dont really care, just enjoy the climbing, you start from were you fell happier, just dont take the grade

For me when I did vandale, no I did not start with two hands low down because I thought it was a much better problem starting with one hand down there and the low pocket, nicer route but for me 7b/+ this way

echoes - Anonymous (08-02-2011 16:24)
I also think It's more logical to sitstart with right hand on the crimpy sidepull above, and climbed it that way. still beautiful problem

If you like to start with your right on the crimp who does matter about that anyway.
The day we opened the problem it looked obvious because we didn't see the crimp because of the fun we got that day and if we even saw it we'll did probebly the same.
And yes i start with two hands in the HOLE of Le Carnage or Vandale .
You will problely have a problem with that and than we come along with the spirit again.
If someone opened a new problem or the problems who are allready there
there will be a convention of the opener himself on how and where the problem start nothing more or less (it's a sugestion of a person)and when you don't like this than you desite but don't start to say that this is against the spirit of climbing.

Trying to understand sugestions of other people that's the spirit of climbing.

Your isseu tell's more about you than about the start of Echoes.